David felt guilty living in a gorgeous cedar house while the ark of the Lord dwelt in just a tent.  He set out to build a nice cedar house for the ark and asked Nathan, the prophet, what he should do.  Nathan told him to go ahead with the project, but, wait . . . no, that night Yahweh told Nathan he hadn’t been hearing right.  Yahweh asked Nathan why He’d need a big house when the tent had been fine all these years.

Yahweh told Nathan to tell David that He was going to make David famous and some day He was going to build a house for himself built by one of his descendants.  Yahweh promised that if his son disobeyed, He would personally smack him around.  But He would still love him!  Yahweh wasn’t going to take the kingdom away from David like He had taken it from Saul.

Although disappointed that Yahweh will not let him build the Temple, David thanks him for what He is going to do.  Yahweh is going to establish His people forever (v. 24), establish the descendants of David forever, and build David a house instead of have David build a house.  Wiersbe points out that the word “house” is “used fifteen times in this chapter and refers to David’s palace (vv. 1-2), the temple (vv.5-7, 13), and David’s dynasty, culminating in the Messiah, Jesus Christ (vv. 11, 13, 16, 18-29).”

Lightner observes four Biblical covenants in Scripture.  They represent four unilateral promises made to Israel that require nothing from Israel for their fulfillment.  One is found in this chapter.  Here is Lightner’s representation. 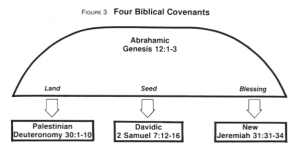 David defeated many of Israel’s enemies during his reign.  They included the Philistines, the Moabites, the Edomites and the Arameans.  The plunder included large amounts of gold and bronze.  One king, Toi, acted preemptively and gave David not only gold and bronze but also silver.  David dedicated all the precious metals to the Lord.

Joab was retained as the commander of David’s forces and Jehosophat was the recorder.  The priests were Zadok, the son of Ahitub and Ahimelech, the son of Abiathar.  David’s sons served as his advisors.

Have you ever thought how great it would be to live in the time of Christ and actually be with Him?  You know you can?  Not by time traveling, but by being sensitive to the Spirit you already have within you (if you have trusted Him).

Look at what Jesus tells us.  He says He will give a Helper (NASB), Counselor (RSV, NIV, HCSB), Advocate (NIV11, NET, NLT), or Comforter (KJV, LB).  He’ll be with us forever (v. 1)!  So Who is this Helper, Counselor, Advocate, or Comforter?  The original Greek term is “parakletos.”  First, notice He is “another.”  There are two words for “another” in Greek.  One means “another of a different kind” and the other is “another of the same kind.”  Guess one this is?  It’s another of the same kind.  He is God the same as Jesus is God.  He is God that remains with us during this dispensation or era of the church.

Do you know why people start not liking you or moving away from you when you trust Christ?  It was because you have the Holy Spirit in you and they don’t like God.  Remember way back in John 3, “This is the judgment, that the Light has come into the world, and men loved the darkness rather than the Light, for their deeds were evil. For everyone who does evil hates the Light, and does not come to the Light for fear that his deeds will be exposed. But he who practices the truth comes to the Light, so that his deeds may be manifested as having been wrought in God” (v. 19).  They are repulsed by the Light the same as two magnets push away from each other.  They move away from the Light within you, the Holy Spirit.

Jesus is prepping the boys because He knows He’s going to be leaving them soon.  He is letting them know He is not abandoning them (v. 18).  He is leaving a Comforter, Helper, Counselor and Advocate with them.  Back to the Greek term, “parakletos.”   Para means “along side” and kletos means “called.”  (A para-church organization is one that is called alongside the church to do the work of the kingdom.)  The Holy Spirit is One called alongside.  He is here to help us, comfort us, guide us and counsel us, and in general help us to do God’s will!

Unfortunately, not many Christians develop the ability to hear from the Holy Spirit.  Of course, there is a close connection with hearing from God subjectively and knowing the Word.  The ones who hear best also know the Word the most.  Colossians 3: 18 command us to, “Let the word of Christ richly dwell within you, with all wisdom teaching and admonishing one another with psalms [and] hymns [and] spiritual songs, singing with thankfulness in your hearts to God.”  In the parallel verse in Ephesians 5: 18b-20 we’re told to, ”  . . .    be filled with the Spirit, 19 speaking to one another in psalms and hymns and spiritual songs, singing and making melody with your heart to the Lord; 20 always giving thanks for all things in the name of our Lord Jesus Christ to God.”  Notice that the results of knowing the Word are similar to the results of being filled with the Spirit?  That’s because the two are related but they are not identical.  There are plenty of people who know a lot of Scripture but are quenching the Spirit (1Thes. 5: 19) and plenty who are getting carried away in things of the Spirit who don’t know the Word!  (The antidote to the mess in the church at Corinth was the Word, cf. all the teaching and 1Cor. 14: 26).

The Holy Spirit would not only be with them but He would be in them (v. 17, cf. Rom. 8: 9).  But again, Jesus balances the subjective with the objective noting they are to know and “keep” His commandments (v. 21). The result would be that He and the Father would “disclose” Themselves to them (v. 21) and “make [their] abode” with them.  They not only needed to have “head knowledge” but also work things out into their lives through “heart knowledge” in following the Holy Spirit.

The Holy Spirit’s job was also to teach them (v. 26) and help their memories by bringing things to their “remembrance” (v. 26).   I often hear an objection to the inerrancy of the Word as “it was passed down at first by word of mouth.”  Two things about that:  1)  disciples memorized the words of the rabbis in that day (so it wasn’t like the modern game played at parties these days where whispered words are passed around a circle and distorted)  2)  the Holy Spirit would bring words to their remembrance so they had a great memory aid!

As a result of having the Comforter with them they would have peace.  The disciples had no need to be “troubled”or “fearful”  (v. 27).  The Holy Spirit would comfort them.

But none of this would happen unless Jesus first went away (v. 28, cf. Jn. 16: 7).  Jesus warned them that the “ruler of the world” was on his way to wreak havoc.  But Jesus  is going to obey the Father by going to the Cross so the world could see the love He has for the Father (v. 31).