After Belshazzar was offed, Darius took over.  He appointed 120 officials under him.  Daniel turned out to be best by far.  That made the other officials jealous so they tried to figure a way to off him.

Since they knew that Daniel prayed to Yahweh three times a day, they got the king to issue a decree that anyone who worshipped any person or thing other than the king would be thrown in a lion’s den.  Of course, Daniel kept praying in just the same way that he had.  When it was brought to the king’s attention that Daniel was violating his decree, he tried to figure a way to extricate Daniel from his predicament.  But he couldn’t figure out a way to free Daniel.  Darius told Daniel he was sure that God would protect him.

So Daniel was thrown into the pit with the lions.  The next morning the king came out to check on him and found that Daniel didn’t have a scratch on him.

The king was very happy.  But he was angry at the other officials and had them thrown in the pit with all their family members.  They didn’t even hit the ground before the lions crushed all their bones and tore them apart.

Then the king praised the Lord and gave him the glory for saving Daniel.  Daniel proceeded to prosper under Darius’ reign.

Peter tells his readers that he is writing to remind them to remember the words of the Old Testament prophets and the New Testament apostles (vv. 1-2).

He warns them that mockers will come in the last times saying, “If Christ hasn’t come back after all this time, He’s not coming back.  Everything is the same as it’s been since creation” (vv. 3-4).  They ignored the fact that the flood destroyed the entire world that had been created out of water by water (v. 5-6).  The created order will some day be demolished by fire in judgment of ungodly men (v. 7).  It may seem like God is taking his time but time is nothing to Him.  In fact, a thousand years to God is like a single day to Him (v. 8).  He is patient, hoping that all people will turn to Him (v. 9).

When the Lord returns, He will surprise everyone just like a thief who breaks in while everyone is sleeping (v. 10a).  The present heaven and earth will explode and be burnt up (v. 10b).

This should be a warning to all people that God is serious about holiness (v. 11).  But since everything will be incinerated (v. 12), the Lord will create a new heaven and earth where everyone will be holy and righteous (v. 13).

Knowing that all this will happen, we should be on alert and be working on cleaning ourselves up (v. 15).  As the Lord is taking His time in bringing about the fulfillment of all things, we should take advantage of the lull in time to lead others to the Lord (v. 15).  Paul said the same things to everyone in writings which even in Peter’s time had been taken as Scripture itself (v. 16a).  Some things that Paul wrote were hard to understand, things which evil people have twisted to their own purposes (v. 16b).  They will be judged for that (v. 16c).

To be forewarned is to be forearmed, says Peter.  Don’t get led astray by the false teachers (v. 17).  Instead, they should grow in grace and increase their knowledge of Christ (v. 18a).  He is the One that should be praised now and forever (v. 18b).

I’ve been watching a series on origins on the mob in New York.  I’ve been amazed that officials can be bribed so easily.  Then as I continue to watch the series, I’ve been even more amazed that some officials were incorruptible.   Don’t crooks realize that there will be a day of reckoning?  Someday they are going to have to die (cf. Heb. 9:27).  And after they die, they are going to have to meet their Maker (cf. Rev. 20:11-15, see The GWT).

Nevertheless, they took even a tiny bribe (v. 21).

A German author, Goethe, wrote the prototypical story of the person, Faust*, who made a deal with the devil.  The play and movie Dang Yankees tells the same story.

A greedy person usually doesn’t realize what kind of a deal he is making with Slew-foot.

Deals with the devil don’t usually work out well.  In fact, such a deal can land you in abject poverty (v. 22b).

Don’t deal with the devil.

Statues of Mephistopheles on the top, Faust on the bottom, at The Rathskeller restaurant in Indianapolis. 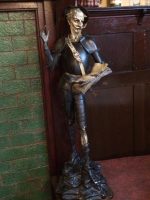 “Then the king gave orders, and Daniel was brought in and cast into the lions’ den. The king spoke and said to Daniel, ‘Your God whom you constantly serve will Himself deliver you.'”   Daniel 6:16

Daniel was an elderly man by this time.  He had been through quite a lot.  He knew how to trust the Lord.  His friends had been challenged by the threat of death by burning.  Now his life was on the line through being thrown in a lion’s pit.  The lions had been starved so they would be hungry enough to devour any kind of meat.

The king liked Daniel.  He didn’t want to see Daniel executed but had been worked into a corner the same way Xerxes had been in the book of Esther.  1 Corinthians 15:58 hadn’t been written yet though Daniel knew the truth of it, “Be steadfast, immovable, always abounding in the work of the Lord, knowing that your labor in the Lord is not in vain.”

He also wouldn’t have known about the promise in 1Corinthians 10:13, “No temptation has overtaken you but such as is common to man; and God is faithful, who will not allow you to be tempted beyond what you are able, but with the temptation will provide the way of escape also, so that you will be able to endure it.”

He may have known the promise given to Joshua on more than one occasion, “Have I not commanded you? Be strong and courageous! Do not tremble or be dismayed, for the LORD your God is with you wherever you go” (Josh. 1:9, cf. Deut. 31: 6; Josh. 1:5).

Are you being challenged by anything or anyone today?  You can trust the Lord the same way Daniel did.  The Lord will not leave you or forsake you.

How are you being challenged today?  Is God asking you to do something you don’t think you are capable of doing?  I think of Sarah as another great example of faith.  She gave her life over to God when her dumb husband, Abraham, turned her over to another man . . .  TWICE!  Yes, I was shouting.  Her own husband sacrificed her twice to save his own skin.  He lied and said she was his sister knowing the king he was dealing with would want her for her beauty. Abraham knew that he would be killed if the king knew they were married so he could have her.  He did this twice (Gen. 12:10-13; 20:2).  Peter praised Sarah for submitting to her husband (cf. 1 Pet. 3:6).  I’m guessing Peter was thinking about Abraham sacrificing his poor wife to save his hide.

Do you feel like you’ve been thrown into a lion’s den today?  Are you enduring anything as bad as Sarah had to endure?

Let the stories of Sarah and Daniel encourage you today.

The purpose of Choose Life is to pick a positive help out of the One Year Bible (OYB) reading plan for the day. There is always something positive in the Word of God to cheer us and give us strength. For more on today’s reading, check out my One Year Bible blog:   Lion Around