Here are the parallels in Kings to our section for today:

Raise Your Hand If You’re Sure

Jehosophat was another of the five best kings but, like Asa, he also had a flaw.

Jehosophat pleased Yahweh so much that all the surrounding nations were afraid of him.  They even sent him presents! (v. 5).

A good friend of mine and mentor died several years ago.  He was a pastor who always tried to get people interested in revival.  I told him I would try to carry on the tradition.  I had no idea how to provoke a revival.  Of course, revivals have to begin with God.   I would have thought prayer was the key to revival but the Scripture seems to indicate that a revival of teaching the Word brings about revival.  We saw that with Asa yesterday and today we see it with Jehosophat (v. 9).  The response to this blog and my interaction with other Christians indicates to me that I am right in thinking we are living in the age of Laodicea.  I do not hardly find anyone who is interested in learning God’s Word.  In fact, they avoid it like the plague.  We have a Sunday morning meeting and even serve food and no one shows any inclination of wanting to learn.  Maybe it’s me.  Maybe I should develop a sense of humor or something.

Speaking of sarcasm, I’ve already covered the story of Micaiah, my favorite prophet, in a previous blog.  Jehosophat though stirring revival in the kingdom, made a big mistake.  He tried to move a relationship along with the northern kingdom by compromise.  He first made an alliance with one of the worst kings ever, Ahab.  He had his son marry Ahab and Jezebel’s daughter (2 Chron. 18:1, cf. 21:6; 22:2b).

I’ve explained the story here already: Raise Your Hand If You’re Sure

Suffice it to say, that Jehosophat did not prosper as a result of his alliance with the evil king Ahab.  As I’ve mentioned so many times, Paul warns us not to be unequally yoked (2 Cor. 6:14-18).  Jehosophat should have kept his distance from Ahab.

Let me set something straight from yesterday’s blog.  Just because God chooses does not mean that we do NOT choose!  Plenty of verses indicate that we must use our own will to choose Christ.  I once attended a church that believed that God chose some to Heaven and some to Hell.  What a horrendous God that would be!  I didn’t go back after I heard that one of the teenagers was telling one of her friends that she might not be one of the chosen.  How awful!  That comes from pride.  I know there are many verses that indicate God chooses us but there are also many that say we ourselves must choose . . .

John 1:12, “But as many as received Him, to them He gave the right to become children of God,  [even] to those who believe in His name.”

John 5:24, “Truly, truly, I say to you, he who hears My word, and believes Him who sent Me, has eternal life, and does not come into judgment, but has passed out of death into life.”

Rev. 3:20,  “Behold, I stand at the door and knock; if anyone hears My voice and opens the door, I will come in to him and will dine with him, and he with Me.”

In the reading today, Paul is trying to explain the place of Israel in God’s plan.  I find that dispensationalist theology solves many problems in Scripture.  I believe Paul was a dispensationalist.  The term comes from the word for stewardship and is used in the King James translation.  The newer translations often use the term “stewardship.”  It simply means that God has related to mankind in different ways in different eras.  For example, was there a difference between the way God deals with man from the time of Moses till today?  Most definitely.  In fact, we even divide our Bibles into Old and New Testaments!  And there are other differences, for example, before and after the Fall . . .  before and after the Flood?   Without going into a long discussion of the different dispensations and eras, you can apply this concept to chapters 9-11 of Romans and it will really help in understanding what Paul was saying about Israel.   Here is a visual of the dispensations.

We will cover all this more tomorrow with chapter 11 but we should say something about verses 9, 10 of Romans 10.  These are really good verses on how to be saved but are misunderstood.  In fact, the fella that led me to the Lord wanted me to say out loud that “Jesus is Lord” because of these verses.  I knew something had happened to me and I didn’t want to do what he said.  But he persisted so I finally did it so I could go back to my room and sleep since it was about 2 a.m. by that point.

Verses 9 and 10 are what is known in literary circles as a “chiasmus.”  The word, chiasmus, is from the Greek word for cross. 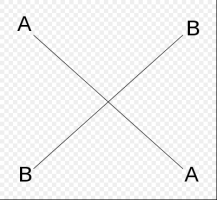 Here is the explanation, “Chiasmus represented as a ‘X’ structure. When read left to right, top to bottom, the first topic (A) is reiterated as the last, and the middle concept (B) appears twice in succession.”

So here’s how it works, the first phrase in v. 9a, “that if you confess with your mouth Jesus as Lord” is reiterated in the last phrase in v. 10b, “and with the mouth he confesses, resulting in salvation.”  But the heart of the matter (no pun intended) is the middle section, 9b and 10a, “and believe in your heart that God raised Him from the dead, you will be saved” and “for with the heart a person believes, [o]resulting in righteousness.”

The middle part is what we are responsible for to be saved, we must trust in Christ.  We must “believe” (9b) and “believe” (10a).  Yeah, I just wrote the same thing twice because Paul did.  He was emphasizing that we need to believe in Christ.  In case you missed it, he says the same thing in v. 11 quoting Is. 28: 16, “Whoever believes in Him will not be disappointed.”  Then for really dense people, he says in verse 13 quoting Joel 2:32, “Whoever will call on the name of the Lord will be saved.”

So why the confusing stuff about confessing with our mouths?  The reason is that when we are saved and have trusted Christ, the only way anyone else would know it is when we tell them.  So we must “confess with [our] mouth[s]” (v. 9a) and “with [our] mouth[s] confess him (v.10b).  This does not mean that we have to actually go and tell someone that we have trusted Christ before we are saved.  That would contradict over Scripture.

The main point of the passage is that Jews are saved the same way as Gentiles and that has been the way through all time eras (dispensations).  There is no change in how anyone is saved from Abraham or Moses or any time in the Old Testament till any time in the New Testament.  That was Paul’s reason to quote Isaiah and Joel.  Salvation is and always has been through faith.  The difference is the expression of the faith.  In the Old Testament, the Jews kept the Mosaic law, in the New Testament believers expressed their faith by trusting in Christ.  And then they should tell others about their faith!  (see tomorrow’s blog on Rom. 10:14-15).

A leader in a company or a chief of a country has some power.  So even someone with a little bit of brains should realize that he should get out of the way of a powerful person.

It is a theorem that anyone can kill a powerful person if they are willing to exchange their own life (v. 2).  It’s not a good idea.

Paul told us to “have nothing to do with stupid, senseless controversies” because  we “know that they breed quarrels” (2 Tim. 2:23  RSV).

Paul ripped off Solomon.  It’s better not to get into fights with other people.  Even theological squabbles.

“ . . . that if you confess with your mouth Jesus as Lord, and believe in your heart that God raised Him from the dead, you will be saved; for with the heart a person believes, resulting in righteousness, and with the mouth he confesses, resulting in salvation.”    Romans 10:9-10

This is one of the most confusing verses in the Bible.  Like there aren’t a lot of those!  Properly understood, it is an amalgamation of the Christian life.

Confused?  Think of one of your favorite pop songs.  Pop songs (hymns, too, for that matter) often have a verse repeated twice and then a chorus to break things up.  Here, Paul is just making a statement that Christians should evangelize after they are saved and then he repeats that idea at the end of verse 10.  In the middle of the two verses is the essence of what gets us “in the door” of salvation.  We believe in our heart that God raised Christ from the dead (v. 9b).  Then Paul repeats, for emphasis, that a person has to believe with their heart (personally trust Christ in their innermost being) that Christ is risen (v. 10a).  He completes his thought with a re-emphasis that our Christian lives should be “worked out” (cf. Phil. 2:12) by using their mouths to proclaim the gospel.  They should be witnesses for Christ (cf. Acts 1:8; Matt. 28:18-20).

In summary, Paul is saying

A:  Christians should be witnesses of what has changed them

B:  Christians are saved by trusting Christ and that He rose from the dead

B’:  It is in the innermost part of a person that they have to trust Christ

A’:  They then should be living their lives as witnesses to others of Christ*

Have you trusted Christ?

Are you telling others about Him?

* Scripture speaks of salvation as being in three phases as represented by three verse tenses.  For example:

Some people also like to say that you have to voice trust in Christ with your mouth in order to be saved.  That is equally wrong.

I think it is fair to use the Roman Road to share the gospel.  Like any other part of Scripture, these verses just have to be interpreted properly.  So go out and tell people:

There you have it.

*Of course, you can also witness to Christ by living a Christian life and not saying anything.  But eventually you will have to say something.

The purpose of the “Choose Life” is to pick a positive help out of the One Year Bible (OYB) reading plan for the day. There is always something positive in the Word of God to cheer us and give us strength. For more on today’s reading, check out my One Year Bible blog:   Pitching With A High ERA